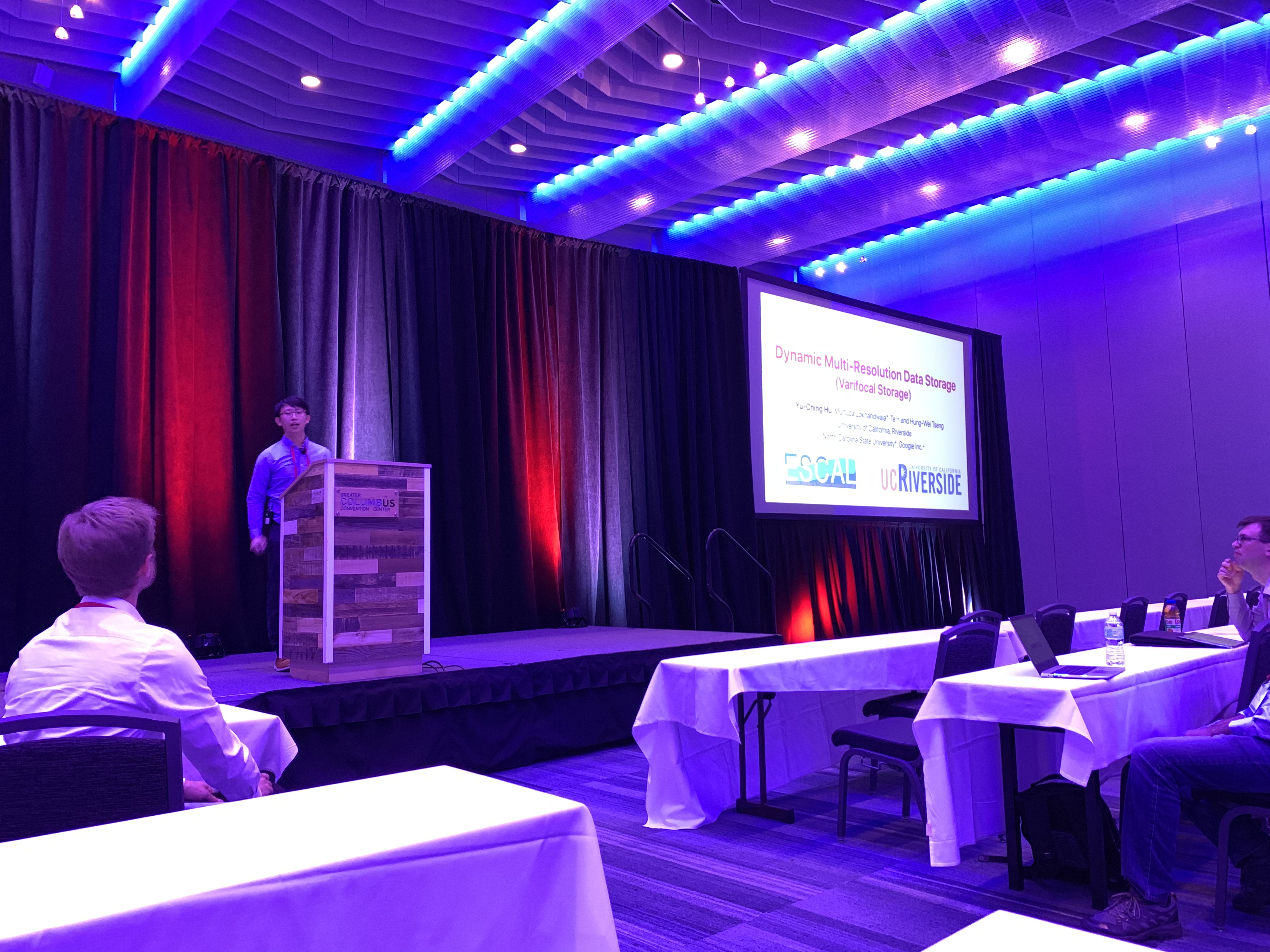 Yu-Ching Hu presented his paper “Dynamic Multi-Resolution Data Storage”, co-authored with Murtuza Lokhandwala, Te I and Hung-Wei Tseng in the 52nd Annual IEEE/ACM International Symposium on Microarchitecture, MICRO 2019. The talk/poster is well-received. This paper is nominated as a best paper candidate and got “honorable mention”, right behind two best papers at the end. Well done, Yu-Ching! 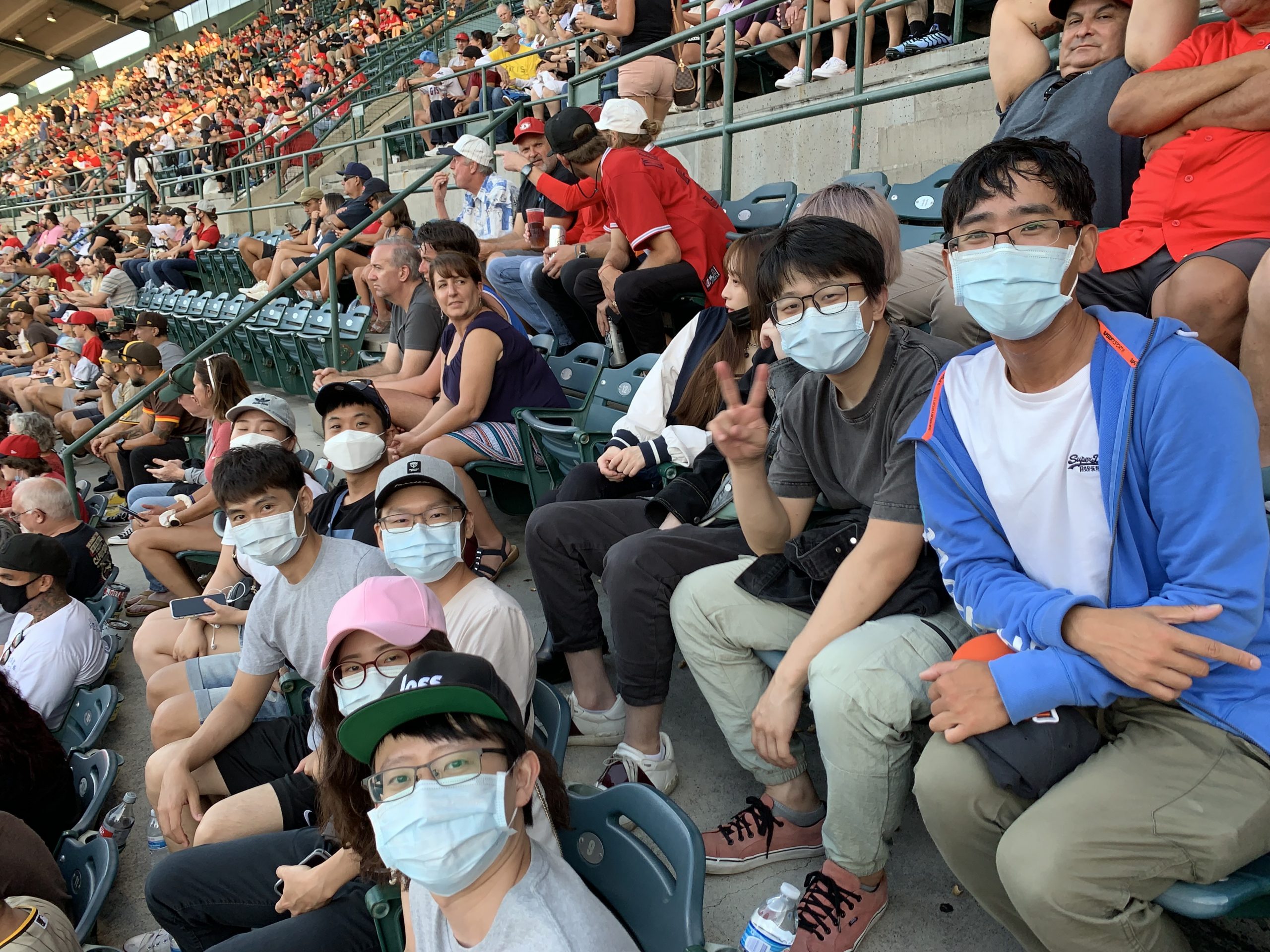 The first-ever baseball of ESCAL together after pandemic, again at Angels Stadium. As you can see from the photo, we are all masked and maintaining the highest standard of COVID-19 prevention! We witnessed the historical moment when Shohei Ohtani made his 20th steal base and Upton made the 1,000th RBI. It’s a rally for Angels. However, being a Padres fan, it’s apparently not a good game from Hung-Wei’s perspective.

You may access the preprint in arXiv
https://arxiv.org/abs/2101.07327
You can now start building your OpenUVR-based VR system by clone our GitHub repo at
https://github.com/escalab/OpenUVR 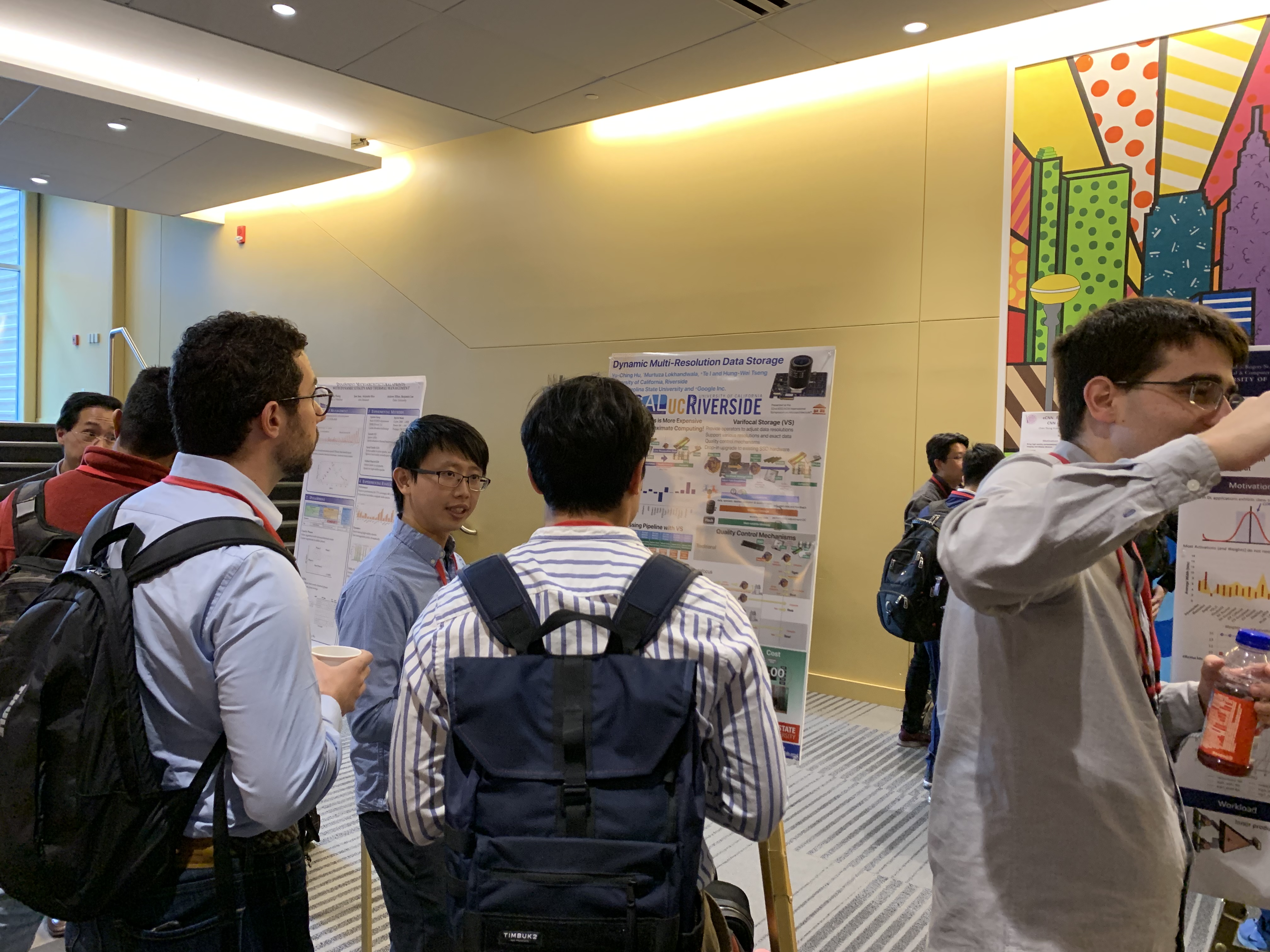 Varifocal Storage chosen as IEEE Micro Top Picks!
Our paper, Dynamic Multi-Resolution Data Storage, authored by Yu-Ching Hu and Hung-Wei Tseng, two former ESCAL students, Murtuza Lokhandwala and Te I, has been selected for IEEE Micro’s Top Picks from the 2020 Computer Architecture Conferences. Top Picks is an annual special edition of IEEE Micro magazine that acknowledges the 10-12 most significant research papers. The authors found a smarter use of in-storage processors and present a holistic system design to address the emerging I/O and data preprocessing bottleneck in modern heterogeneous computer architectures based on approximate hardware. Prior to the recognition from Micro Top Picks, the same project also received ACM/IEEE MICRO’s best paper honorable mention in 2019 and Facebook’s research award in 2018.

With the rapid growth of dataset sizes but limited improvement of high-performance computers, we need to revisit the existing programming and execution models to efficiently utilize all system components. In modern computers, lots of deficiencies in applications are related to data management and movements. The vision of Extreme Storage & Computer Architecture Laboratory is to revolutionary change the way how people think about programming and computing today — using a data-centric perspective in programming instead of the conventional computing-centric approach. ESCAL conducts research in systems and computer architecture with focus on storage systems, parallel processing, high-performance computing, programming languages and runtime systems.

The explosive demand on AI/ML workloads drive the emergence of AI/ML accelerators, including commercialized NVIDIA Tensor Cores and Google TPUs. These AI/ML accelerators are essentially matrix processors and are theoretically helpful to any application with matrix operations. This project bridges the missing system/architecture/programming language support in democratizing AI/ML accelerators. As matrix operations are conventionally inefficient, this project also revises the core algorithm in compute kernels to better utilize operators of AI/ML accelerators. With this project, ESCAL envisions ourselves to lead the next trend of a revolution — similar to the one happened on GPUs. You may now try our most recent GPTPU project from the GitHub repo: https://github.com/escalab/GPTPU

As parallel computer architectures significantly shrinking the execution time in compute kernels, the performance bottlenecks of applications shift to the rest of part of execution, including data movement, object deserialization/serialization as well as other software overheads in managing data storage. To address this new bottleneck, the best approach is to not move data and endow storage devices with new roles. Morpheus is one of the very first research project that implements this concept in real systems. We utilize existing, commercially available hardware components to build the Morpheus-SSD. The Morpheus model not only speeds up a set of heterogeneous computing applications by 1.32x, but also allows these applications to better utilize emerging data transfer methods that can send data directly to the GPU via peer-to-peer to further achieve 1.39x speedup. Summarizer further provides mechanisms to dynamically adjust the workload between the host and intelligent SSDs, making more efficient use of all computing units in a system and boost the performance of big data analytics. This line of research also helps ESCAL receive Facebook research award, 2018 and MICRO TopPicks in 2020.

With hardware accelerators improving the latency in computation, the system software stack that were traditionally underrated in designing applications becomes more critical. In ESCAL, we focus on those underrated bottlenecks to achieve significant performance improvement without using new hardware. The most recent example is the OpenUVR system, where we eliminate unnecessary memory copies and allow the VR system loop to complete within 14 ms latency with just modern desktop PC, existing WiFi network links, raspberry Pi 4b+ and an HDMI compatible head mount display.